(All baptisms in Acts) (Where are Peter’s, John’s water baptism in Christ?)

NAS Acts 1:22 beginning with the baptism of John, until the day that He was taken up from us-- one of these should become a witness with us of His resurrection."  (Peter waiting in .)

NAS Acts 2:38 And Peter said to them, "Repent, and let each of you be baptized in the name of Jesus Christ for the forgiveness of your sins; and you shall receive the gift of the Holy Spirit. (Peter to Pentecost gathered Jews: The formulation of ‘repent, baptism, forgiveness of sins, and gift of the Holy Spirit,’ was a necessary formulation for religious Jews to convert to the Jesus as their Savior.  See a different formulation in Acts 8:16 and 10:47 and 19:5, for Samaritans and Gentiles who had believed in Jesus.  Acts 10:43 and  Acts 15:7-9 and 1 Peter 1:7-9 demonstrate that Peter does not believe in water baptism for eternal salvation.)

NAS Acts 2:41 So then, those who had received his word were baptized; and there were added that day about three thousand souls. (Pentecost converts.)

NAS Acts 8:12 But when they believed Philip preaching the good news about the and the name of Jesus Christ, they were being baptized, men and women alike.

NAS Acts 8:13 And even Simon himself believed; and after being baptized, he continued on with Philip; and as he observed signs and great miracles taking place, he was constantly amazed.

NAS Acts 8:36 And as they went along the road they came to some water; and the eunuch *said, "Look! Water! What prevents me from being baptized?"

NAS Acts 8:38 And he ordered the chariot to stop; and they both went down into the water, Philip as well as the eunuch; and he baptized him.

NAS Acts 9:18 And immediately there fell from his eyes something like scales, and he regained his sight, and he arose and was baptized; (Saul’s conversion and baptism.)

NAS Acts 10:37 you yourselves know the thing which took place throughout all Judea, starting from , after the baptism which John proclaimed.

NAS Acts 10:47 "Surely no one can refuse the water for these to be baptized who have received the Holy Spirit just as we did, can he?" (Gentiles in the house of the centurion Cornelius responded to Peter’s proclamation of Jesus as Savior, and were immediately indwelt and filled by the Holy Spirit.  The formulation of: belief, Holy Spirit falling, and then water baptism was for the instruction of Jews traveling with Peter—verse 45.)

NAS Acts 10:48 And he ordered them to be baptized in the name of Jesus Christ. Then they asked him to stay on for a few days.

NAS Acts 13:24 after John had proclaimed before His coming a baptism of repentance to all the people of . (Paul and Barnabas in Pisidian Antioch )

NAS Acts 16:15 And when she and her household had been baptized, she urged us, saying, "If you have judged me to be faithful to the Lord, come into my house and stay." And she prevailed upon us. (At .)

NAS Acts 16:33 And he took them that very hour of the night and washed their wounds, and immediately he was baptized, he and all his household. (At .)

NAS Acts 18:8 And Crispus, the leader of the synagogue, believed in the Lord with all his household, and many of the Corinthians when they heard were believing and being baptized.

NAS Acts 18:25 This man had been instructed in the way of the Lord; and being fervent in spirit, he was speaking and teaching accurately the things concerning Jesus, being acquainted only with the baptism of John; (Apollos at Ephesus.)

NAS Acts 19:3 And he said, "Into what then were you baptized?" And they said, "Into John's baptism."

NAS Acts 19:4 And Paul said, "John baptized with the baptism of repentance, telling the people to believe in Him who was coming after him, that is, in Jesus."

NAS Acts 22:16 'And now why do you delay? Arise, and be baptized, and wash away your sins, calling on His name.' (Paul describing his conversion to a crowd.)

NAS 1 Corinthians 1:17 For Christ did not send me to baptize, but to preach the gospel, not in cleverness of speech, that the cross of Christ should not be made void.

NAS 1 Corinthians 12:13 For by one Spirit we were all baptized into one body, whether Jews or Greeks, whether slaves or free, and we were all made to drink of one Spirit.

NAS John 14:15 "If you love Me, you will keep My commandments. 16 "And I will ask the Father, and He will give you another Helper, that He may be with you forever; 17 that is the Spirit of truth, whom the world cannot receive, because it does not behold Him or know Him, but you know Him because He abides with you, and will be in you.

NAS Acts 2:1 And when the day of Pentecost had come, they were all together in one place. 2 And suddenly there came from heaven a noise like a violent, rushing wind, and it filled the whole house where they were sitting. 3 And there appeared to them tongues as of fire distributing themselves, and they rested on each one of them. 4 And they were all filled with the Holy Spirit and began to speak with other tongues, as the Spirit was giving them utterance.

NAS Acts 15:7 And after there had been much debate, Peter stood up and said to them, "Brethren, you know that in the early days God made a choice among you, that by my mouth the Gentiles should hear the word of the gospel and believe. 8 "And God, who knows the heart, bore witness to them, giving them the Holy Spirit, just as He also did to us; 9 and He made no distinction between us and them, cleansing their hearts by faith.

NAS 1 Peter 1:7 that the proof of your faith, being more precious than gold which is perishable, even though tested by fire, may be found to result in praise and glory and honor at the revelation of Jesus Christ; 8 and though you have not seen Him, you love Him, and though you do not see Him now, but believe in Him, you greatly rejoice with joy inexpressible and full of glory, 9 obtaining as the outcome of your faith the salvation of your souls. 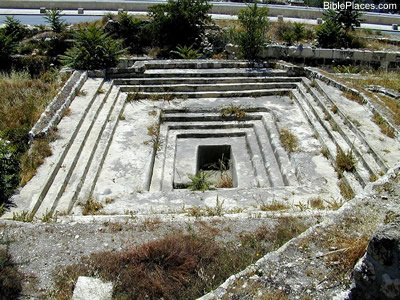 This mikveh (ritual bath of purification) is located to the south of the close to the Huldah gates, and dates to the second-Temple period. Jews would cleanse themselves from ritual impurity in this mikveh in order to be qualified to enter the (see Lev 14, 15; Num 19).

Acts 10:43 "Of Him all the prophets bear witness that through His name everyone who believes in Him receives forgiveness of sins."